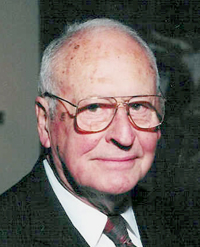 Hudson Matlock received his B.S. in civil engineering from The University of Texas at Austin in 1947, followed by his M.S. in 1950. He began his teaching career at UT Austin in 1947 as an Instructor, and served as Chairman of the Department of Civil Engineering from 1972-1976. He retired as a Professor in 1976 and is currently Professor Emeritus in Civil Engineering. Matlock taught courses in Materials, Experimental Mechanics, and Soil Mechanics; his research and consulting work were primarily applicable to offshore structures and their foundations.

After retiring from teaching at UT Austin, Matlock became Vice-President for Research and Development at the Earth Technology Corporation in Long Beach, California. He retired from Earth Technology in 1985 and has since been a consulting engineer until the present.

Matlock has been involved in numerous engineering societies and activities, including Chi Epsilon and Tau Beta Pi, Fellow 1947-48. He received the Offshore Technology Conference Distinguished Achievement Award for Individuals (with Dr. Lymon Reese) in 1985. He was elected to the National Academy of Engineering in 1982, and was named a Distinguished Engineering Graduate by the College of Engineering, UT Austin, in 1986. He is a Fellow of the American Society of Civil Engineers, and a Registered Professional Engineer in Texas. Matlock is the author or co-author of numerous publications dealing with offshore structures and foundations.